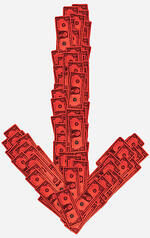 The average number of days on the market for single-famly homes declined 11.9 percent and real estate inventory (all properties) declined 32.9 percent, according to MAR data.