Freddie Mac's survey dates back to 1971. 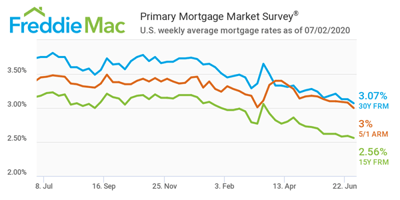 "Mortgage rates continue to slowly drift downward with a distinct possibility that the average 30-year fixed-rate mortgage could dip below 3 percent later this year," Sam Khater, Freddie Mac's Chief Economist, said. "On the economic front, incoming data suggest the rebound in economic activity has paused in the last couple of weeks, with modest declines in consumer spending and a pullback in purchase activity."

The 15-year, fixed-rate mortgage, a popular choice for homeowners who want to refinance, averaged 2.56 percent, with an average 0.8 point. The 15-year loan averaged 2.59 percent the previous week and 3.18 percent during the same period last year.

Despite the falling interest rates, mortgage applications to purchase a home decreased 2 percent for the week ending June 26, 2020, compared with the previous week; however, purchase applications rose 15 percent compared to the same week in 2019, according to the Mortgage Bankers Association. The lack of supply has led to the median single-family sale price increasing 3.2 percent on a year-over-year basis to $423,000, up from $410,000 in May 2019. Through May, the median price of a single-family home in Massachusetts increased by 5.7 percent compared to the first five months of 2019.