NH Home Prices Up, But Increasing Slower Than U.S. Average 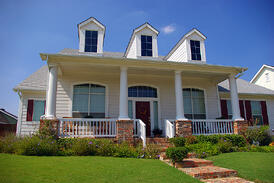 Only 11 states showed price increases of less than 2.6 percent.