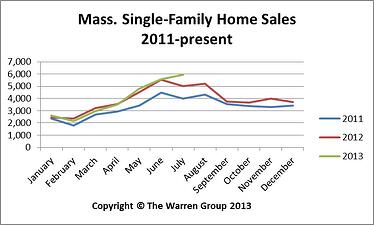 Sales of Massachusetts single-family homes increased 18 percent in July compared to July 2012. Single-family home sales were the highest for any month since June 2006, The Warren Group, publisher of Banker & Tradesman, reported August 29, 2013.

Condominium sales also jumped in July, rising nearly 17 percent from a year earlier. A total of 2,336 condos sold in July, up from 1,998 condo sales in July 2012. Through July, condo sales were also up almost 5 percent, increasing to 11,094 sales from 10,607 sales during the same seven-month period last year.